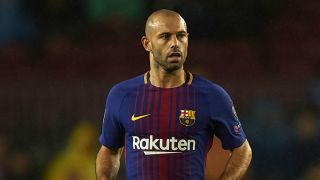 Javier Mascherano will not rule out a return to Argentina with his playing time at Barcelona having been significantly reduced.

The 33-year-old is frustrated by his lack of playing time at Camp Nou and has previously suggested he would consider his options at the end of the season.

While he will not rule out a return to his native Argentina, where he took his first steps in professional football at River Plate, it is not in his short-term plans.

"The focus is to be happy and the decision I make will depend on how things are going," Mascherano, who will retire from international football after next year's World Cup, told TyC Sports.

"In Barcelona, it is obvious I am not playing at the frequency I played before. I'm still playing, I'm still competing, I'm in a team where every game I play is because I earn it in training, but it's clear there are many times you want to play more.

"I'm not saying that I have to play more, because the starters are two players of the highest level and there is not much more to do there.

"I'm always analysing the situation and I will see. In principle, I have not thought in the short term about returning to Argentina. I haven't had any proposals, but I will see.

"I am not going to say I will rule something out because things change and I don't want to be imprisoned by my words."

Argentina left it late to punch their ticket for the World Cup, only clinching their place with a 3-1 win away to Ecuador in their final qualifier last month.

Jorge Sampaoli will be hoping to improve upon the country's 2014 runner-up finish in Brazil and Mascherano hopes they can avoid a number of his Barca team-mates during their run.

"Spain are a team that, because of the way the play, are very tricky," said the defender.

"They try to take charge, have possession and it is very difficult to get the ball. They are an opponent I would prefer to avoid."