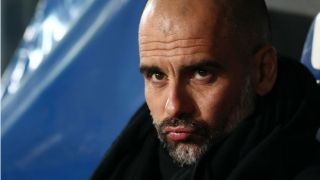 Brushing Basel aside 4-0 in the Champions League will help Manchester City when they turn towards some crunch domestic fixtures over the coming weeks, according to manager Pep Guardiola.

A brace from Ilkay Gundogan either side of first-half goals from Bernardo Silva and Sergio Aguero saw the runaway Premier League leaders shrug off a shaky opening in the last-16 tie at St Jakob-Park and turn in their latest dazzling attacking display of the campaign.

Next month's return leg is now a virtual formality and the match could serve as relative respite from City's bid for honours across four fronts.

Basel's visit to the Etihad Stadium on March 7 comes 10 days after City's engagement with Arsenal in the EFL Cup final at Wembley, with Premier League matches against the Gunners and Chelsea in between those two matches.

Should Guardiola's men beat League One side Wigan Athletic on Monday, they will face an FA Cup quarter-final on the weekend of March 17 and 18.

Speaking after the game in Switzerland and assessing a varied schedule to come, he said: "It's so important. Of course we will be focused against Basel but with the result…

"Arsenal and Chelsea, it will be so important to be focused there and make another step to try to be close to the Premier League.

"We didn’t have this in mind. From my experience in the Champions League, when you play the last 16 always you reserve [judgement] until the second game.

"But we were clinical, we played good. I think we played in the same level as over the last period.

Thanks for the support tonight!February 13, 2018

Guardiola voiced his concerns over the hectic festive fixture schedule in England earlier this season but suggested Basel fell below the levels that saw them defeat Manchester United during the group stages because they were rusty on the back of Swiss football's mid-season break.

"I had my experiences coaching in Germany and I have to say that in the winter break – maybe Raphael Wicky, the coach of Basel, knows it better – you lose your rhythm, you have a lack of rhythm," he said.

"But Basel showed they can play at this level when they beat Benfica, CSKA Moscow and Manchester United. They were in a different rhythm clearly.

"Such a break, like two months, it's difficult to overcome. I had this experience in Munich and it was of little advantage to us. My opinion has not changed in terms of Basel."

Leroy Sane made his return to action from the bench during the final half hour – a month ahead of schedule following ankle ligament damage – and Guardiola revealed the Germany international was introduced due to Raheem Sterling suffering from muscular tightness.

Veteran midfielder Yaya Toure did not travel to Switzerland following a bout of illness but could be in contention to face Wigan.