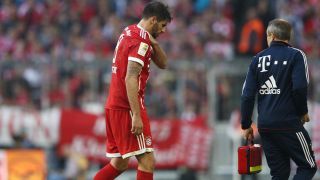 Bayern Munich midfielder Javi Martinez played down fears of a long-term injury absence after he was forced off with a shoulder complaint against Freiburg on Saturday.

The 29-year-old required treatment following a heavy collision and left the field in pain with 20 minutes remaining.

But Martinez took to social media to insist his lay-off would be a brief one.

"It won't be a long pause, just some days to be back," he wrote. "Anyways, very happy for the victory and proud of my team-mates."

It won't be a long pause, just some days to be back... anyways very happy for the victory and proud of my teammates! October 14, 2017

Bayern went on to win 5-0 at the Allianz Arena as they reduced Borussia Dortmund's lead atop the Bundesliga to two points.

The Bavarian outfit also sit second in Champions League Group B, ahead of Celtic on goal difference.