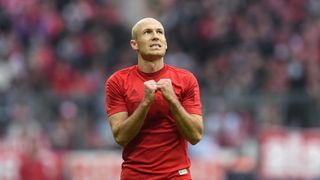 Arjen Robben has admitted he had his doubts about leaving Real Madrid for Bayern Munich in the summer of 2009.

The Netherlands international was sold as Madrid looked to balance their books after bringing in a number of high-profile names, but he was initially reluctant to leave the Santiago Bernabeu.

Bayern were persistent, though, and Robben eventually put his concerns about the club's stature aside and opted to move to the Allianz Arena.

"It was a bit of a weird summer with the return of Florentino Perez as president. And then all the new signings arrived. Cristiano Ronaldo, Kaka, Karim Benzema and Xabi Alonso all came to Madrid for a huge amount of money," Robben told Fox Sports.

"We were told that the club would be able to make some money on me if they sold me. But I initially did not want to leave. I had possibly my best pre-season ever, but I still did not get a chance, so I had to make a decision.

"There was contact with Bayern, but it was a difficult decision, the most difficult one of my career. Bayern were not among the European elite at that moment - like we are now - and it was a step back for me.

"I went for it in the end, because the club did everything within their power to sign me. And the presence of Louis van Gaal obviously played a role as well.

"I am a real Bayern man now, I am into my eighth season here and I have become a part of this club."