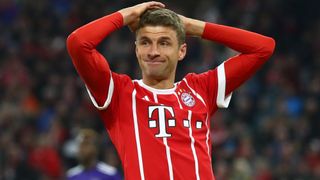 Thomas Muller has been ruled out for three weeks after suffering a hamstring strain against Hamburg on Saturday, Bayern Munich have confirmed.

The Germany international lasted just 10 minutes of Bayern's 1-0 win before being forced off with what coach Jupp Heynckes hoped would only be "cramps".

However, after undergoing examination on Sunday, Bayern have revealed the full extent of his injury, with the strain set to keep him out until the middle of next month.

The injury comes at a particularly bad time for Muller, with Heynckes claiming on Friday that he was close to being back to his old self.

A three-week spell on the sidelines for , who suffered a strained hamstring against HSV.Wishing you a speedy recovery, Thomas! October 23, 2017

He will miss a number of crucial matches, with two games against RB Leipzig – one in the DFB-Pokal and another in the Bundesliga – coming in the next five days.

Muller is also expected to be sidelined for the trips to Celtic and Borussia Dortmund in the Champions League and Bundesliga respectively.