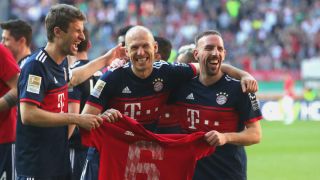 Both players' deals expire at the end of the season, and they featured in a 4-1 win away at Augsburg on Saturday that wrapped up a sixth successive title, with Robben on the scoresheet.

Bayern coach Jupp Heynckes hailed the pair as "great professionals with outstanding quality", before Rummenigge proposed that there is little reason not to hand both men new deals.

"There is not much to say against an extension," he told SportBild.

Robben, now 34, was less confident of his future as he acknowledged that he might be about to depart Munich.

Asked if this could be his last season at Bayern, the former Netherlands international replied: "It could be - everything is possible.

"That's why you have to try to enjoy it. It's not always easy, of course, because you have to plan as well.

"I have to think about it, too. But the only thing that matters to me right now is this last month of the season."

With the title wrapped up, Bayern can now turn their attentions to Wednesday's second leg of their Champions League quarter-final against Sevilla, with Heynckes' side holding a 2-1 advantage from last week's opener in Spain.

There is also the not insignificant matter of a DFB-Pokal semi-final against Bayer Leverkusen on April 17.