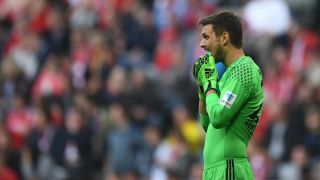 Bayern Munich have been hit by a further goalkeeping injury blow as Sven Ulreich, like Manuel Neuer, has been ruled out for the rest of the season.

Carlo Ancelotti's men have already clinched the Bundesliga title and will see out the rest of the campaign with third-choice goalkeeper Tom Starke.

With Starke selected for Saturday's clash with Darmstadt, Bayern announced via Twitter that Ulreich will miss the remainder of 2016-17 following an injury to his elbow in training.

Starke was making his first appearance of the season and just his sixth league outing in total since joining Bayern from Hoffenheim in 2012.

suffered an elbow ligament injury in training on Friday and will miss the rest of the season. May 6, 2017