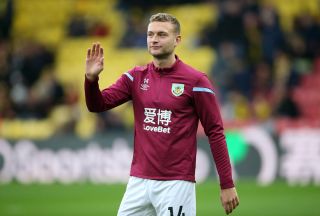 Burnley have confirmed that they have given defender Ben Gibson permission to train with former club Middlesbrough after his hopes of a January move fell through.

The 27-year-old, the Clarets’ joint-record signing, is now working at Boro’s Rockliffe Park base after a frustrating 18 months at Turf Moor, although the PA news agency understands there is currently no arrangement in place for a return to Teesside.

A club statement said: “Following reports in the national press, Burnley Football Club can confirm they have given Ben Gibson permission to train with Middlesbrough Football Club.

“The defender made it clear in the weeks leading up to the end of the January transfer window that he wanted to leave Turf Moor to seek regular first team football.

“Unfortunately for the player, the club did not receive an offer it felt was acceptable and he remains contracted to the club. The club will not be making any further comment on this matter.”

Burnley paid Boro £15million for Gibson, the nephew of chairman Steve, when they snapped him up in August 2018.

However, he has played only six times – including twice in the Europa League – and made just one Premier League appearance since, last turning out for the club in a 3-1 Carabao Cup defeat by League One Sunderland in August.

He was linked with a January move away from Turf Moor, with Boro, Celtic and Watford among his reported suitors, although manager Sean Dyche later insisted he had not been close to leaving.