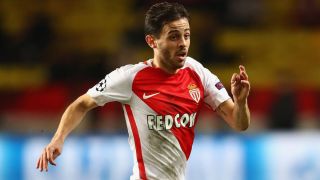 Bernardo Silva said he could not say no to Pep Guardiola after sealing his move to Manchester City from Monaco.

The Portugal international completed a transfer reportedly worth £43million on Friday, becoming City's first signing since their 2016-17 season came to an end.

Silva is excited about the upcoming experience of playing under Guardiola and thinks their link-up will lead to him winning major trophies during his stay in England.

"If he is not the best coach in the world, he is one of the best," Silva, who will wear the number 20 shirt, told City's website.

"Of course when you have the opportunity of being trained by Guardiola, you don't say no.

"As we all know, what he did with Barcelona and Bayern Munich was amazing and we expect also here that he will win titles.

"It is great to have the chance to work with him and to have this opportunity."

Silva is willing to do work as hard as is required in order to lead City to silverware.

"Nowadays if you don't work hard, even if you are one of the best you don't succeed," added the 22-year-old.

"Manchester City over the last few years has played to win and I want to win medals. When I spoke to the people at Manchester City they always told me their goal was to win titles and that is also my goal.

"So, I’m here with all the amazing players that we have, the coach and all the team that is behind us, I think we can do it."

Prior to joining up with City, Silva will represent Portugal in the Confederations Cup, having been named in the European champions' squad alongside the likes of Cristiano Ronaldo and former Monaco team-mate Joao Moutinho.