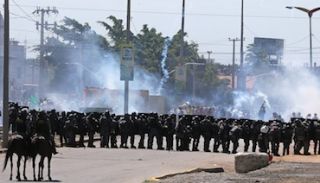 The decisions, made separately in Sao Paulo and Rio de Janeiro, followed another day of protests across Brazil, which also included a march by demonstrators around a major international football match in the north-eastern city of Fortaleza.

This month's transport fare hikes, which came as Brazil struggles with annual inflation of 6.5 percent, stirred a groundswell of other complaints, leading to the biggest protests to sweep Brazil in more than two decades. The protests have been organized by a disparate group of activists who have rallied supporters via social media.

Sao Paulo state Governor Geraldo Alckmin, announcing a reduction in fares to their level before the hike, called it "important... so the city can have the tranquility needed to debate issues calmly."

It remains unclear whether revoking the fare increases, which followed similar fare cuts in other state capitals, will be enough to quell the unrest. Initially focused in cities like Sao Paulo, Rio and Brasilia, demonstrations have spread, with protests planned in more than 70 smaller cities for Thursday.

After the fare increase was scrapped, leaders of the protest movement in Sao Paulo said their cause would now shift to free public transport and that a planned protest for Thursday would be a celebration.

President Dilma Rousseff, a former leftist guerrilla who was imprisoned and tortured by Brazil's former military dictatorship as a youth, acknowledged on Tuesday the legitimacy of the protesters' demands.

Her Workers' Party presided over a near decade-long economic boom that lifted more than 30 million people from poverty. But a recent slowdown is prompting many among Brazil's growing middle class to demand more of the government.

She praised the mostly non-violent demonstrators and said her government would seek to improve schools, hospitals, infrastructure and other public facilities and services.

To help maintain order, Rousseff dispatched federal troops to five cities hosting games during the Confederations Cup, an international soccer tournament that began earlier this month. The competition is a warm-up for the 2014 World Cup, a much bigger tournament that Brazil will also host.

The deployment, part of the contingency plan for the Confederations Cup, is similar to the previous use of federal troops when crime, violence or other unrest disrupted annual Carnival celebrations and other big events.

In Fortaleza, where Brazil beat Mexico on Wednesday in a Confederations Cup game, protesters crossed police lines and were pushed back by security forces with teargas, rubber bullets and pepper spray. Inside the stadium, Brazilian fans showed support for the demonstrations, singing well past the end of the national anthem and waving banners in solidarity.

Contrasting the country's high taxes with its ramshackle schools, hospitals and other shabby government services, demonstrators have criticized the 28 billion reais ($12.9 billion) of public money being spent on the World Cup, to be played in 12 Brazilian cities.