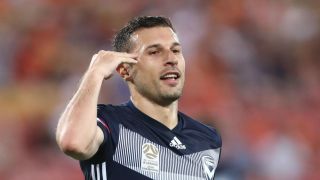 The New Zealand international took centre stage after Ola Toivonen continued his impressive start to life in Australia by nodding in his eighth goal of the season.

Barbarouses won and converted a penalty three minutes into the second half before Storm Roux's header and two late Barbarouses efforts added gloss.

The win takes the Victory to within striking distance of Perth, although the Western Australians also have a game in hand.

Five of the best from @gomvfc !

Kosta Barbarouses led the way for the visitors with a hat-trick. #ALeague#BRIvMVC#SummerOfHeroespic.twitter.com/6x7tvuoAju— Hyundai A-League (@ALeague) January 15, 2019

Toivonen created the first chance of the game, putting in Barbarouses after 13 minutes only for his strike partner to shoot wastefully wide.

The former Sunderland forward showed him how it should be done a minute later, latching on to Terry Antonis' cross from the left and placing a header back across Roar goalkeeper Jamie Young.

Roar pushed forward in search of an equaliser but Adam Taggart nodded over from close range before seeing another effort smartly blocked by Victory goalkeeper Lawrence Thomas.

Kevin Muscat's side required a second goal and got it after 48 minutes. Luke DeVere was adjudged to have handled in the area in trying to stop Barbarouses and the former Roar striker took full retribution from the spot.

Barbarouses notched his second of the game by curling a lovely shot beyond Young and he completed his hat-trick with three minutes to go, firing home from eight yards.