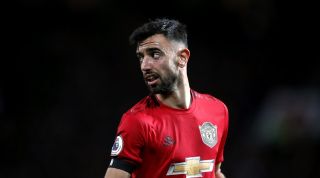 Paul Scholes has heaped praise on Manchester United new boy Bruno Fernandes after the Portugal international scored his second goal for the club on Thursday.

Fernandes was on target as United thrashed Club Brugge 5-0 at Old Trafford, sealing a 6-1 aggregate victory in their Europa League last-32 tie.

The midfielder has been in excellent form since moving to Old Trafford from Sporting CP in a deal worth an initial £46.5m last month.

And Scholes says he has been hugely impressed by the impact the Portuguese has made in his first few weeks in Manchester.

"It was a perfect night and there were a lot of very good performances. Fernandes stood out and he controlled the pace of play," he told BT Sport.

"He looks like he has brought this team to life. He has made a team that did not look that watchable at times look exciting and very watchable right now.

"When you bring in a player like Fernandes it livens everyone up. Usually a player from a different country takes more time. Hopefully, he stays in this form for the rest of the season.

"What do I like about Bruno? Everything so far. Creativity. His awareness on the pitch. Before the ball comes to him he knows what's around him.

"He's sensational - you just wonder why nobody else came in for him or why we didn't get him in the summer.

"When I think of him the only other player I can think of is Kevin De Bruyne at Manchester City. He is the best player in the Premier League but Fernandes is right up there.

“I think the fact that the last couple of weeks nobody has mentioned Pogba coming back into the team speaks volumes about what Fernandes has brought to the team.

“He’s probably brought what you expected from [Paul] Pogba over the last couple of years, which hasn’t quite materialised.

“I think the balance of the team looks really good. He’s playing [Nemanja] Matic and Fred, I know it was [Scott] McTominay [against Brugge], but those two sitting there allowing Fernandes the freedom has really worked for them. I don’t think you go away from that when it’s working.

“With the Pogba situation, we know what a top player he is, it doesn’t look like he’ll be here next year - we don’t know that, but we think that from what we’re hearing.

“I just think carry on as you were, it’s looking good enough at the minute.

“With Pogba, the way he’s played, would he get into this team at the minute? It would be tough for him.

“With the way the team’s playing, how can you change that? They’ve looked as good as they’ve looked in the last three or four years to me.”

United return to Premier League action against Everton on Sunday.