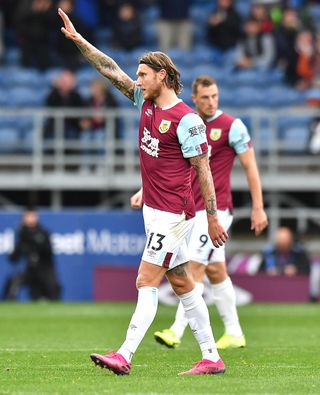 Burnely midfielder Jeff Hendrick scored the only goal in the 72nd minute after Seamus Coleman had been shown a second yellow card with more than half an hour remaining.

The Everton right-back was fortunate not to see a straight red just before half-time when he caught Erik Pieters with his studs, and his second booking came for a clash with Dwight McNeil.

Everton had dominated the first half without managing to find the net and another blank leaves them just above the relegation zone and in their worst run of form since Christmas 2014.

Burnley, by contrast, are now unbeaten in four games and flying high near the top of the table.

Johann Berg Gudmundsson returned to the starting line-up after his calf injury, with Hendrick moving into the centre of midfield, while Alex Iwobi replaced Theo Walcott for Everton.

The Toffees were much improved against Manchester City last weekend despite losing and they were on top from the off.

Gylfi Sigurdsson had the first shot on target in the fifth minute from a free-kick after Ashley Westwood fouled Dominic Calvert-Lewin just outside the box.

It forced Nick Pope into a diving save, although the England man would have been disappointed had he not kept it out.

Gudmundsson headed a deep Pieters cross straight at Jordan Pickford at the other end while Pope was grateful to see the ball roll past his post after being left stranded when Iwobi’s shot hit Ben Mee.

Burnley finally offered some concerted pressure midway through the half. First a deep corner was volleyed against Pickford’s legs by Hendrick and, when the ball was lofted back in, Mee looked to have played in Chris Wood only for the striker to mis-control.

A last-ditch clearance from James Tarkowski prevented the ball falling to Calvert-Lewin in front of goal, while Dwight McNeil cleared off the line after a corner deflected towards goal off Tarkowski.

Iwobi then had the best chance of the half but did not make good enough contact eight yards out and Matt Lowton was able to make a vital block.

There was great concern for Pieters three minutes before half-time when Coleman followed through with his studs onto the full-back’s lower leg.

Coleman, who suffered a horrific broken leg in a tackle in 2017, was clearly contrite and knelt next to Pieters while he received treatment.

It appeared the Dutchman had suffered no lasting damage but 10 minutes after half-time he admitted defeat and hobbled off with his shirt over his face to be replaced by Charlie Taylor.

A minute later, Coleman’s afternoon also came to a premature end. Turf Moor was up in arms when the defender jumped into McNeil and referee Graham Scott pulled out the yellow card again.

Sigurdsson was the man sacrificed as Silva sent on Djibril Sidibe to take Coleman’s place.

The pattern of the game did not change immediately but there was a gaping hole in Everton’s defence as Hendrick was allowed to run in at the back post and thump Westwood’s corner beyond Pickford.

Everton left space at the back as they pushed forward in search of an equaliser, and Burnley seemed to have too many options in the 80th minute, with substitute Jay Rodriguez eventually shooting at Pickford.

Silva remonstrated with referee Scott after the final whistle and boos could clearly be heard from the visiting fans as the manager walked off.