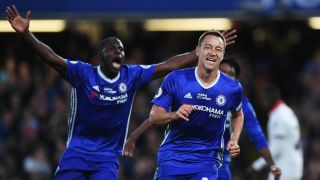 John Terry was on target in one of his last games for Chelsea as they recorded an entertaining 4-3 win over Watford thanks to a late winner from Cesc Fabregas.

The experienced defender was handed a rare start as Antonio Conte made nine changes compared to the team that clinched the Premier League title against West Brom on Friday and he enjoyed an eventful first half.

Terry opened the scoring in the 22nd minute with a finish from close range, only to inadvertently set up Etienne Capoue for the equaliser with a poor clearance two minutes later.

Cesar Azpilicueta and Michy Batshuayi then struck either side of half-time to hand Chelsea a two-goal lead, only for Daryl Janmaat to pull one back.

Substitute Stefano Okaka seemed to have a salvaged a draw for Watford with 16 minutes left, but it was Fabregas who had the final say, before Sebastian Prodl received his marching orders in added time.

Chelsea are now on 90 points from 37 games ahead of their final game against Sunderland on Sunday, while Watford remain 16th on 40 points.

Both sides made a cautious start to the game, but the champions eventually went ahead midway through the first half via Terry. Kurt Zouma’s header from a corner somewhat fortuitously fell to his defensive partner and Terry was alert to poke the ball past Gomes from close range.

He undid all his good work 90 seconds later, however, sending a poor headed clearance straight toward Capoue, the Frenchman gratefully accepting the present to level the scoring with a header from 10 yards out.

Eden Hazard nearly restored Chelsea’s lead when he aimed inches wide after a fine long ball from Willian, before Azpilicueta did make it 2-1 in the 36th minute. The Watford defence failed to adequately deal with a corner from the left and the wing-back drilled a powerful shot past Gomes from just inside the area to put his side back ahead.

The newly crowned champions went in search of a third after the break and they got the goal they were after when Batshuayi - scorer of the goal that sealed the title - added his name to the score sheet with an easy finish after yet another corner, tapping the ball into the empty net after being set up by Nathan Ake.

3 - Michy Batshuayi has scored three goals from just four shots on target in the Premier League this season. Clinical.May 15, 2017

Watford refused to throw in the towel, though, and Janmaat replied within two minutes, dancing past Ake before curling a low shot into the far corner to boost his side's hopes of getting a good result.

And Okaka looked to have spoiled the party as he fired a low shot past Asmir Begovic in the 74th minute just moments after coming off the bench.

It was not meant to be for Watford, however, as Fabregas sealed the win for Antonio Conte's men with a sublime finish following an assist from Willian.

And there was more bad news for the visitors in added time when Prodl received his second yellow after bringing down Pedro.