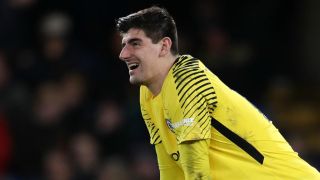 Thibaut Courtois is set to hold talks with Chelsea over a new contract, but the goalkeeper hinted he may seek a future move to LaLiga as his "heart is in Madrid".

Courtois spent three seasons on loan at Atletico Madrid after joining Chelsea from Genk, helping the club to LaLiga glory and the Champions League final in 2013-14.

The 25-year-old subsequently established himself as the number one at Stamford Bridge but, along with Manchester United's David de Gea, has been heavily linked with Real Madrid.

And Courtois, whose Chelsea deal is due to expire at the end of next season, indicated a LaLiga return may be on the cards later in his career.

"My personal situation is related to the city of Madrid," Courtois told Sport/Foot Magazine.

"My two children live there with their mum. I have my daughter every day on FaceTime. She often tells me that she misses me. My son is still too small to communicate like that.

"Whenever I have the opportunity, I try to return to Spain. As a situation, it is not always easy. Yes, my heart is in Madrid. It is logical and understandable.

"If they [Real Madrid] want me, they have to contact Chelsea. We'll see. But they have not done that. What is certain is that one day I will return to Madrid. I love Spain, I love the city, I spent three wonderful years there. It is there that I became an adult.

"Atletico was a real group of friends. We went out together and my team-mates taught me a language I did not know at all when I arrived. When I left, I cried. My first days in London were not easy. England, when I arrived, was colder, more business. Now, I feel very good here.

"I understand that the rumours are coming back today, as we are talking about a new goalkeeper there [at Madrid]. But I do not pay much attention to that, I stay focused on Chelsea.

"If Real are really interested, my personal situation could influence things. The family aspect is priceless. But I repeat to you that, for the moment, I'm busy talking to Chelsea to extend."

.: 'Now we have to work hard again and hope that the victories come again because it was a bad week.’February 6, 2018

Madrid have also been linked with a blockbuster move for Courtois' fellow Belgium international Eden Hazard in a bid to refresh a fading attack.

But Courtois indicated Chelsea may be able to tempt Hazard into renewing his Stamford Bridge deal despite the team making a feeble attempt at a Premier League title defence under Antonio Conte.

"We agreed to meet again in February because the club had more urgent issues to deal with in January," Courtois said.

"There is no rush, I am under contract until 2019. Normally, there is no problem, I will extend. I am happy here and I see a club that still wants to win a lot of titles. The signs are positive.

"Their desire to also extend Eden Hazard's deal reassures me."