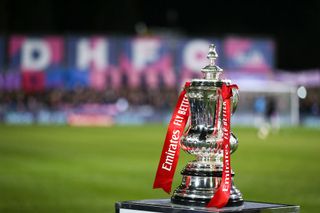 Chichester City have been drawn to play at Tranmere or Wycombe in the second round of the FA Cup.

Chichester, of the Isthmian League South East Division, the lowest-ranked club left in the competition, received a first-round bye after Bury were withdrawn.

Isthmian League North Division side Maldon & Tiptree, who knocked out Leyton Orient on Sunday, will play Grimsby or Newport at home.

Following the draw at Oaklands Park we now know that we'll travel to either @TranmereRovers or @wwfcofficial of League One in the 2nd round of the #EmiratesFACup…— Chichester City FC (@ChiCityFC) November 11, 2019

National League side Dover, who beat League One strugglers Southend on Sunday, have been rewarded with a tie at either Stevenage or Peterborough.

Sunderland will play at home against either AFC Wimbledon or Doncaster if they win their first-round replay against Gillingham.

Oldham have been drawn at home against local rivals Salford if the latter overcome Burton in their replay, while Shrewsbury or Bradford will play at home against Mansfield.

League One high-flyers Fleetwood and Oxford will play at Crawley and at Walsall or Darlington respectively.