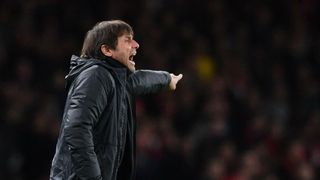 Antonio Conte says he has full faith in Chelsea's plan, despite elimination from the EFL Cup semi-finals at the hands of Arsenal.

A bizarre Antonio Rudiger own goal and Granit Xhaka's poacher's finish sent the Gunners to Wembley, as Chelsea were unable to build upon a fantastic start afforded to them by Eden Hazard's seventh-minute opener.

Edin Dzeko is the latest big man to be linked, but Roma said they had not considered Chelsea's bid ahead of Wednesday's fixture with Sampdoria, in which the Bosnian scored a last-minute equaliser.

With the Premier League seemingly out of reach and runaway LaLiga leaders Barcelona to come in the Champions League, nerves may be frayed at Stamford Bridge - just not Conte's.

"When the squad is not big you have to always play with the same players," he told a news conference.

Conte: 'It's right for us to dream, because dreams help you work, but at the same time we must be realistic.' January 24, 2018

"I made a lot of rotations this season. We reached the semi-final and if you see before who played in this competition, we played with young players. I have to do the same in the FA Cup, but then you risk going out. Against Norwich we risked this.

"But it is not right to take only one game to make a decision to understand. There is a programme and a plan.

"It's wrong we have to make decisions only on one game. The situation has always been the same since the summer. I continue to work and I'm very happy with my players.

"I continue to give everything for the club and the club makes the best decisions for the team."