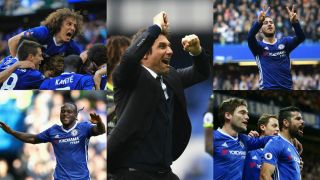 Chelsea are basking in the glory of a fifth Premier League title in 12 years, with Antonio Conte continuing his run of club-level success.

The Blues have utterly dominated domestically this season, a streak of 13 wins on the spin late in 2016 sending them well clear of a chasing pack that has spent most of the campaign tripping over each other.

After Friday's 1-0 victory at West Brom got the party started, we examine the five key factors in Chelsea's title triumph.

Saturday September 24, 18:15 - This is when Chelsea's season really began.

As Michael Oliver signalled half-time at the Emirates Stadium, Conte knew the game was up, goals from Alexis Sanchez, Theo Walcott and Mesut Ozil meant defeat at Arsenal was a formality. But it would prompt the mother of responses.

The 4-2-4 that had served Conte so well with Siena and Bari was out and a three-man defence - utilised dazzlingly at Juventus and with Italy - would be the bedrock for a goalless second half, and then 13 wins in a row.

The system - and those who fit it best - has become set in stone.

Only Manchester United's title-winners of 1993 and Leeds United's 1994-95 side have had a more settled XI in the Premier League era. Alex Ferguson picked Schmeichel; Parker, Pallister, Bruce, Irwin; Sharpe, Ince, McClair, Giggs; Cantona and Hughes 19 times out of 42 fixtures, at the tail-end of an era of smaller squads when rotation was very much a dirty word.

Although he was an unused substitute on Friday as he recovers from injury, Kante has won 54 times in 70 Premier League games, or in 77.14 per cent of them, if you prefer.

Last year's champion Italian coach Claudio Ranieri said of Kante: "I thought he must have a pack full of batteries hidden in his shorts."

Batteries eventually run down, but PFA Player of the Year Kante is yet to show any signs of going into stand-by.

Chelsea's general domination of games this season has meant Kante needn't be the omnipresent defensive pest he was for the Foxes. Still, only Everton's Idrissa Gueye (132) has made more than his 114 tackles and he ranks third for interceptions and recoveries in the Premier League.

THE REBIRTH OF MOSES

You certainly wouldn't have seen it coming... 22 games, two goals. 23 games, four goals. 31 games, three goals. Victor Moses' three seasons on loan at Liverpool, Stoke and West Ham hardly earmarked him as one of the crucial cogs in a title-winning defence.

But it is a position in which Conte has a talent for adaptation. Antonio Candreva has been one of Serie A's most potent wingers in recent years, but was utilised deeper by Conte for the national team. Candreva said of his then Italy coach in 2015: "He prepares games with a maniacal attention to detail, both offensively and defensively."

Such mania cemented Candreva's international spot and has made a Premier League regular of out of Moses - whose absence was touted as the key factor in last month's shock defeat at home to Crystal Palace.

Candreva has been suggested as a potential target, amid a host of other wing-back options, but Conte may have solved the problem from within, saying of Moses earlier this season: "He deserved to stay with us this season, and also now he's deserving to play in the line-up."

GETTING COSTA AND HAZARD BACK ONSIDE

Whether Diego Costa and Eden Hazard really were the "rats" Jose Mourinho lamented as his Chelsea return neared the death rattle, only he will know. What is certain, however, is that the pair have been rejuvenated by Conte.

Kept on a leash by the Italian, Costa has moved away from the boisterous toddler that Mourinho let pick fights across the pitch and rediscovered his scoring touch.

Costa scored in all but four of Chelsea's 13 consecutive victories between October and New Year's Eve.

Then came the blip. Having netted 14 goals in his first 19 games this season, Costa has managed six in 15 since a reported row with Conte amid links with a mega-bucks move to China.

After stewing in a goalless run of five games, Costa struck twice and assisted Hazard's opener in a 4-2 win over Southampton which erased memories of a 2-0 reverse at the hands of Mourinho at Old Trafford.

Hazard, meanwhile, has been simply sublime and a return 15 league goals represents his best for the Blues. As he approaches his peak years, the Belgian is once again attracting the interest of Real Madrid, with his redeployment as a floating playmaker behind Costa and that wondrous solo goal against Arsenal suggesting he is back in the upper echelons of global performers.

January 2016, John Terry reveals Chelsea have not offered him a new contract and he will leave at the end of the season. Outrage ensues, the club reverse their decision and the skipper remains.

April 2017, Chelsea confirm they have not offered Terry a new deal and he will leave at the end of the season. A collective shrug of the shoulders welcomes the news as the skipper plots a move south in the Premier League standings.

Terry has made 715 appearances for the Blues, a record 578 of them as captain, but he has played just 16 minutes of Premier League football since Conte's revolution at the back.

In the heart of the defence has been David Luiz, but not the David Luiz you remember.

The wild noodle bowl of hair remains, and a 30-yard free-kick sensation against Liverpool is evidence of the lingering 'joga bonito' in his heart.

But David Luiz 2.0 has been a hard-nosed stopper, making over 100 defensive interventions (tackles, interceptions and blocks) in 32 league games this season, while the most telling number of all may well be zero - the number of mistakes that have led to opposition goals this season.