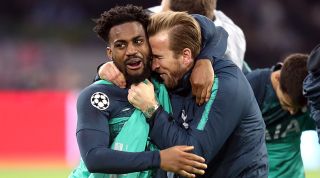 DannyRose, who helped Tottenham secure a spot in the Champions League final, is being eyed up by Paris Saint-Germain according to the Daily Mirror. The paper says that Rose, who has 26 England caps, could leave Spurs if clubs offer the right price.

Manchester City have dialled back their interest in signing Portuguese forward BrunoFernandes, according to the Sun. There was speculation earlier this week that the Sporting man could move for £47 million, but Pep Guardiola has cooled on the move.

Sheffield United, who will be playing Premier League football next season, are looking to land striker StephaneBahoken from Angers but will have to pay £8.5 million, reports the Daily Mirror.

The Blades will also look to bolster their firepower with the signing of Middlesbrough striker BrittAssombalonga, the Northern Echo reports.

LloydKelly, capped three times for England's under-21 side, has caught the attention of Southampton, who will have to pay £15 million for the Bristol City man, writes the Daily Mirror.

Philippe Coutinho: Manchester United will have to pay €100 million (£86m) if they wish to land the Barcelona forward, reports AS.

Erkan Eyibil: Promotion hopefuls Aston Villa are looking at signing the 17-year-old from Mainz, according to Turkish Football.

Alvaro Morata: Atletico Madrid can have the Chelsea striker on loan for another season, but will have to pay €18 million (£15.5m), AS says.

QUIZ! Can you name the players who've featured in the Premier League AND scored a Champions League hat-trick?