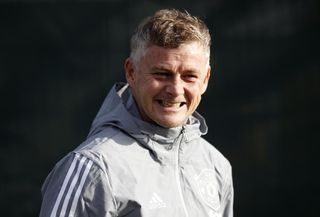 Paul Pogba and David De Gea were among the players missing as Manchester United trained on Wednesday morning ahead of their Europa League clash against Partizan Belgrade.

Jesse Lingard took part in the session at Carrington before the squad flew to Serbia for Thursday’s match, but Pogba and De Gea were missing along with Diogo Dalot, Luke Shaw, Nemanja Matic, Tim Fosu-Mensah, Axel Tuanzebe and long-term absentee Eric Bailly.

De Gea suffered an injury scare while on international duty with Spain earlier this month, appearing to hurt his hamstring in a Euro 2020 qualifier in Sweden, but was able to play in Sunday’s 1-1 draw with Liverpool.

However, it now appears he will be replaced by Sergio Romero in Belgrade.

Pogba remains sidelined by a foot problem, having spent time in Dubai during the international break to try to regain fitness. Shaw and Matic were absent as they too have travelled to Dubai to take part in warm-weather training.

Tuanzebe added to Ole Gunnar Solskjaer’s injury woes when he withdrew from the starting XI to face Liverpool at Old Trafford with a hip problem.

But there was some better news as Lingard took part following a hamstring problem, while Anthony Martial and Aaron Wan-Bissaka were also involved after featuring at the weekend, as was Phil Jones after he made his return to the substitutes’ bench.

With a number of players out, academy full-back Ethan Laird also took part in the session.