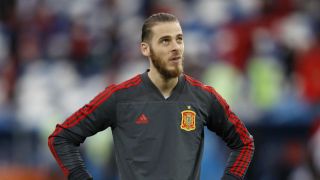 Spain boss Fernando Hierro has insisted he will not drop David de Gea from his starting line-up ahead of the knockout stages of the World Cup.

The Manchester United goalkeeper has attracted widespread criticism following his performances so far in Russia, where he conceded five goals in three group stage matches.

Spain have Athletic Bilbao's Kepa Arrizabalaga and veteran Pepe Reina to choose from but Hierro has no desire to make a change between the sticks.

Asked by Marca if De Gea will remain in goal for the round-of-16 clash against the World Cup hosts, Hierro responded: "Yes, he will play.

"I respect the opinions of everyone, but the one who makes the decisions is us, I have a lot of clear ideas for the match against Russia."

Spain finished ahead of Portugal in Group B and Hierro is preparing for a tough test against the tournament hosts.

"We know how Russia plays, the leading strikers, the air balls that are very dangerous. These are their characteristics in general but they also play in their stadium and with their fans."