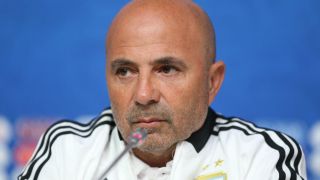 Under-fire Argentina boss Jorge Sampaoli is bullish over Argentina's hopes of keeping their World Cup dream alive with victory over Nigeria and challenged them to write "a new page in the history of the national squad" in St Petersburg.

A chastening 3-0 defeat to Croatia in Group D last week made for grim reading in that regard for one of international football's heavyweight nations.

Only victory over the Super Eagles – a country they have beaten in four previous World Cups – at Krestovsky Stadium on Tuesday will give Argentina and star man Lionel Messi a chance of remaining in Russia for the knockout stages.

Reports of recriminations in the aftermath of the Croatia loss, with some senior players understood to be unhappy over Sampaoli's methods, have dominated the build-up, but the former Chile and Sevilla boss was in defiant form at his pre-match news conference.

"It's been a very difficult week after that defeat, which was painful for us," he said. "We now find ourselves in the last match with everything at stake [in terms of] qualifying for the last 16.

"As for certain situations, I can't clarify things that are untrue and things that don't exist.

"After the last match, I took responsibility for that defeat. The next day, as a coach, all I thought about was winning [on Tuesday].

Sampaoli did not deny talks between his players and technical staff took place after their latest setback but refused to divulge the details, instead railing against a "virtual world" of speculation, claim and counter-claim that makes those on the receiving end feel like "criminals".

"It's not that easy to separate oneself. Sometimes, I do have to enter the virtual world to tell there are realities, facts that can't be changed.

"I have to deal exclusively with the reality that Argentina didn't win against Croatia. That complicated matters for our progression.

Sampaoli did not indulge in his occasional habit of divulging Argentina's line-up a day before the game, with reports back in his homeland suggesting sweeping changes in terms of both tactics and personnel are once again likely.

Uncapped goalkeeper Franco Armani is in line for his debut in place of Willy Caballero, whose bizarre error led directly to Ante Rebic's opener for Croatia.

Armani flanked Sampaoli at his briefing but the coach would not confirm the River Plate man's involvement or be drawn on other particulars – such as Gonzalo Higuain replacing Sergio Aguero in attack.

"We have been practicing a few specificities, I do have everything clear in my mind but for this match I will not give the line-up," he added.

"The players themselves don't know the starting XI yet. What I can say is that I have total confidence and security that Argentina will now begin to experience this World Cup in a very different way. "