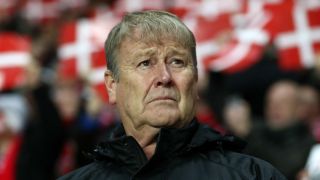 Denmark's World Cup preparations stuttered as they laboured to a 0-0 friendly draw against Chile at Aalborg Stadium.

Age Hareide's side beat Panama 1-0 in their previous outing, but struggled to break down the South American champions and missed the opportunity to fire a warning to their World Cup opponents, with France, Peru and Australia awaiting them in Russia.

Chile gave the hosts an early scare when Pablo Hernandez powered a header towards goal, forcing Kasper Schmeichel into an acrobatic fingertip save and the ball hit the crossbar before bouncing away.

Denmark struggled to find their rhythm in a scrappy opening to the game and when Christian Eriksen did split the Chile defence, Andreas Cornelius scooped his shot high and wide after 18 minutes.

Chile goalkeeper Johnny Herrera was called upon to make two excellent saves from Pione Sisto and Eriksen, before Nicolas Castillo flashed a thunderbolt just wide of Schmeichel's goal at the end of a first half the visitors edged.

Denmark pieced together a wonderful sweeping move 10 minutes into the second half that saw Eriksen float the ball to Nicklas Bendtner, who volleyed it onto the head of Cornelius but he headed just wide.

The closest Hareide's men came to scoring was a curling Lasse Schone free-kick in the 75th minute, which looked destined to beat Herrera but came back off the post and left the Danes frustrated.