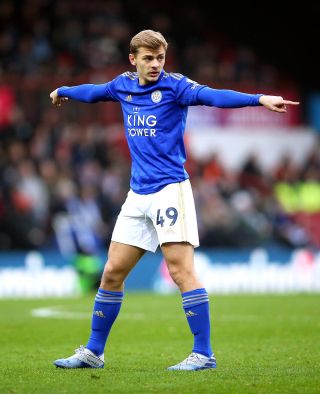 Leicester midfielder Kiernan Dewsbury-Hall has capped off a memorable couple of days by joining Blackpool on loan.

The 21-year-old, who made his first-team debut in the Foxes’ FA Cup win at Brentford on Saturday, will stay with the Seasiders until the end of the season.

Dewsbury-Hall told Blackpool’s official website: “It’s been a whirlwind of a 72 hours.

“On Saturday I made my debut for the first team in the FA Cup, then the next day I travelled here to get this loan deal sorted.

“I’m really excited to come here and get some games under my belt. Hopefully I can make a difference to the team and see where it takes us.”

Blackpool boss Simon Grayson added: “Kiernan is a player we’ve watched closely for a while now, so we’re delighted that we’ve been able to bring him in.

“He’s very highly thought of at Leicester and I’d like to thank the club for allowing him to continue his development with us.

“He’ll be another terrific addition to the squad and we’re looking forward to working with him.”