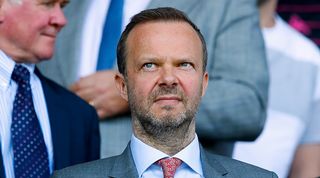 Manchester United have accused The Sun of having "advance notice" of an attack on Ed Woodward's home last month.

Woodward and his family were not inside the Cheshire property at the time of the attack, which was subsequently condemned by the club.

And United have now issued a complaint to the Independent Press Standards Organisation (IPSO), alleging that The Sun received prior notice of the incident.

“Manchester United has made a formal complaint to the Independent Press Standards Organisation (IPSO) regarding The Sun newspaper and its coverage of the attack on the house of executive vice-chairman Ed Woodward," a club statement read.

“The complaint relates to the story 'Ed Devils: Man Utd fans throw flares at Ed Woodward’s house in shocking scenes as anti-board protests continue to escalate’ carried online and on the back page of the print edition dated 29 January 2020.

“The club believes that The Sun had received advance notice of the intended attack, which included criminal damage and intent to intimidate, and that the journalist was present as it happened. The quality of the images accompanying the story indicate that a photographer was also present.

"Not only did the journalist fail to discharge the basic duty of a responsible member of society to report an impending crime and avert potential danger and criminal damage; his presence both encouraged and rewarded the perpetrators. We believe this was a clear breach of both the IPSO editors’ code and journalistic ethics.

“The decision to make a formal complaint to IPSO was not taken lightly. We will await its ruling with keen interest as an important test of the self-regulatory system for newspapers and its ability to uphold ethical standards in the press.”

A spokesperson for The Sun responded: “We have been made aware this evening of a complaint to IPSO by Manchester United. The Sun condemns fully the attack on Mr Woodward’s home and is happy to cooperate fully with any police inquiry.

“However The Sun, like all newspapers, vigorously defends its right to report. Following a tip-off that there was to be a protest a Sun reporter attended. The Sun accurately reported the events that unfolded.

“At no time was our reporter made aware of what was to take place nor incited it or encouraged any criminal activity. The article made it clear that the behaviour was criminal and unacceptable. The Sun supports wholeheartedly the Editors’ Code Of Conduct and will defend the complaint to IPSO.”