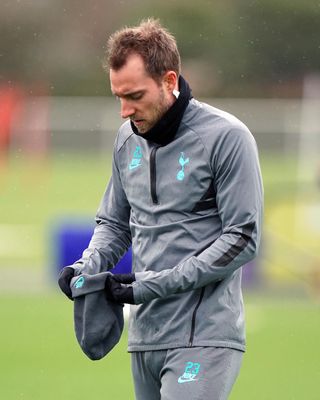 Christian Eriksen looks set to have played his last game for Tottenham after he was left out of their FA Cup fourth-round game at Southampton.

The Denmark international is primed to join Inter Milan before the January transfer window shuts, with reports in Italy suggesting he will travel for a medical early next week.

Eyebrows were raised when he still travelled to St Mary’s on Saturday afternoon, but Jose Mourinho did not include him in the matchday 18.

Despite constant speculation surrounding Eriksen’s future this month, which Mourinho described as a difficult situation, the Portuguese has still continued to involve the midfielder.

He came on as a second-half substitute in Wednesday’s 2-1 win over Norwich, but was booed by some fans who have been unhappy about the Dane’s supposed lack of commitment this season.

Having said he wanted to leave in the summer for a fresh challenge, his performance levels have dropped, especially after he failed to secure a move in the summer transfer window.

However, if a move away does go through next week the 27-year-old will be remembered as one of the key men who helped Tottenham become a force in English football under Mauricio Pochettino.

He scored 69 goals in all competitions across 305 appearances and made many more in a lethal combination with the likes of Harry Kane, Son Heung-min and Dele Alli.

Defender Danny Rose was also not included in the squad at Saints amid reported interest from Newcastle.