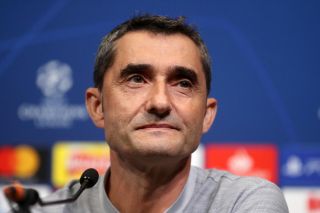 Barcelona coach Ernesto Valverde says his side cannot afford to repeat the mistakes they made against Real Betis when they head to Benito Villamarin Stadium on Sunday.

Betis became the only team to beat Barca at the Nou Camp so far this season when they won 4-3 in November.

Valverde insists there can be no surprises this time around.

He said in a press conference: “We know what type of team Betis are, what they make us do and also what they stop us from doing.

“In the first game we played earlier in the season, we suffered a lot, the only game we have lost at home.

“It is a vital game for us, a difficult away trip against a team we know are always motivated when they play us.

“Three points are going to be very, very important. We know just what type of a team they are, we know what they will demand against us.

“I am sure Betis will play a similar game to last time, they play with a lot of strength, they will try and take the initiative.”

Betis’ stunning triumph last November ended a 14-match winless sequence in the Spanish top-flight against Barcelona, stretching back to March 2008.

Head coach Quique Setien is certain they can claim another upset.

He said in quotes on Betis’ official website: “We are firmly convinced that we can give another surprise in this game.

“Barcelona are almost infallible but the reality is that they are not completely, we saw that (when Betis played them at the Nou Camp) and in other games where they have not won.

“They have very good footballers but we are sure of being able to make a good game and complicate their way of playing.”