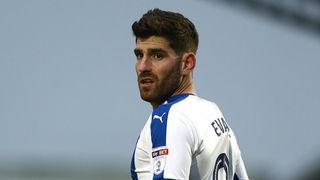 Ched Evans has rejoined Sheffield United as the League One champions prepare for life in the Championship.

The former Wales international has signed a three-year deal after Sheffield United agreed an undisclosed fee with Chesterfield for the striker, who was found guilty of rape in 2012.

Evans was sentenced to five years in prison, of which he served two-and-a-half years, but his conviction was later quashed and he was cleared at a retrial in October 2016, after which he signed for Chesterfield.

The 28-year-old scored five league goals for Chesterfield and Evans thanked the club, who were relegated to League Two this season, for giving him the chance to return to football.

CONFIRMED: United have signed Ched Evans for an undisclosed fee. See for full details May 8, 2017

"I am delighted to be back," Evans said. "I still feel I have plenty to prove in football both at club and international level and I believe I can achieve those goals at United, playing in front of the terrific fans whose support I have always appreciated.

"I am very grateful to Chesterfield, the board and football management for giving me an opportunity to return to the game. It is just disappointing that it has come in season which has seen the club suffer relegation. I would like to thank the Chesterfield fans who made me feel so welcome."