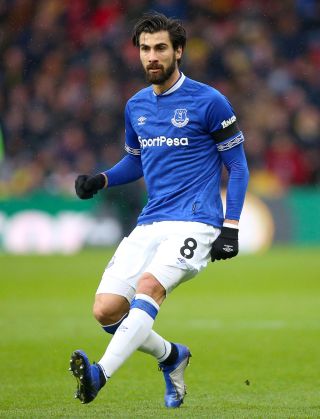 Everton have announced the permanent signing of midfielder Andre Gomes from Barcelona on a five-year deal.

He told evertontv: “I’m really happy to sign the contract with Everton – it wasn’t hard to decide, it was an easy decision and I’m very happy to have made it.

“I know the club made a massive effort to sign me and I’m very happy and thankful to them. I said during the year that I felt part of a family and that is the most important thing to me.

“Last year was a really good experience for me. I just wanted to feel part of something special and I found it here. It was good for me in that moment and right now, after signing for Everton, it’s even better.”

Everton manager Marco Silva was delighted to complete a deal to bring Gomes back to Merseyside and told evertonfc.com: “Andre was a really important player for us last season and I think we were really able to help him, too.

“It was a good decision to bring Andre to the club and we made it one of our priorities to get him back. I am delighted we have been able to do that as he is a quality player and we were so happy with what he gave us.

“He is someone who has shown he can operate to a high level in the Premier League and for our club, and I know our fans will be fantastic in welcoming him back.

“What Andre learned about the club, our fans and our vision convinced him that this is where he wants to play his football and I know he shares the big ambitions that we have going forwards.”

Gomes, who was a member of Portugal’s Euro 2016-winning squad, moved to the Nou Camp from Valencia in the summer of 2016 for £30million and made 72 appearances, half of which were as a substitute.