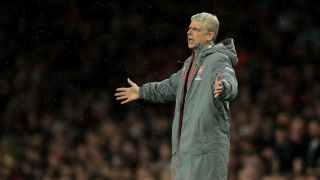 These are familiar surroundings for Arsenal. No team has featured in more FA Cup finals than the men from north London and they have won six during Arsene Wenger’s time at the club.

But for all their experience in English football's traditional showpiece, a cloud of uncertainty hangs over the club ahead of their 20th final outing in Saturday's Wembley clash with Chelsea.

Two decades have passed since Wenger arrived at Highbury from Japan as an unknown quantity.

'Le Professeur', as he became known, masterminded a double-winning campaign during his first full season in charge, but he saw the silverware dry up following his fourth FA Cup triumph in 2005, having also collected three Premier League titles.

In the 12 years that have followed, the often frugal Arsenal have managed just two Cup victories, while rivals such as Manchester City, Manchester United and Chelsea have spent big and reaped the rewards over the same period.

That relative lack of success has driven a clear wedge between Gunners fans – those who back Wenger and those who want him gone – and the lack of clarity over his future has contributed to fears that the likes of Alexis Sanchez and Mesut Ozil could also leave at the end of this season.

It has also affected results; Wenger himself admitted as much just this week after failing to deliver a top-four finish for the first time since the 1997-98 campaign.

Both Arsenal factions, it seems, will soon have their answer as to whether Wenger will remain beyond this weekend's final, with a board meeting scheduled to take place afterwards.

But the whole saga is an unwelcome and overbearing distraction ahead of that crunch clash. Not that Wenger, whose contract is due to expire, was in any mood to clear things up at his pre-match news conference.

"I want to win the Cup for my club and that's all I care about," he said.

"Would it be a nice farewell? No, what I want is to win the next game. It's not about me, it's about us winning the trophy and giving everything to achieve it.

"I want to win the Cup because I think the team has redressed very well the situation on the sporting side. It would be a good crowning of what we have done in the last two months."

An ongoing power struggle between Alisher Usmanov and Stan Kroenke only adds to the off-field intrigue at Emirates Stadium.

The club is teetering, slowly and inevitably, towards a new era. What shape that will take remains a mystery, for now.

But whether Wenger remains as manager, leaves, or stays on as part of a restructured team, definitive answers over the future direction of the club are almost more important to Arsenal at this stage than the outcome of Saturday's match.

There are potentially seismic days ahead for Arsenal, and – win or lose – the Cup final could become secondary to any decision over their long-serving manager's fate.