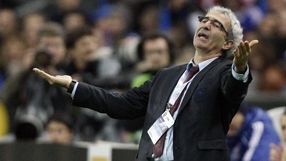 Domenech, who was appointed in 2004, has been under pressure because of France's poor performances during their World Cup qualifying campaign. France only secured their place by pipping Ireland thanks to the goal set up by Thierry Henry's handball.

"I wrote a letter to (FFF's chairman) Jean-Pierre Escalettes asking him to place the renewal of Domenech's contract on the agenda of the next meeting of the federal council on December 18," Chambily told football magazine France Football.

"I have two goals: the departure of Raymond Domenech and the protection of Jean-Pierre Escalettes, a very good man, who I know has been affected, even traumatised, by the situation we find ourselves in."

"I know the majority of the council members don't want to keep Domenech. My only fear is that they beat a retreat for personal reasons," added the 77-year-old businessman.

"The FFF begged me not to raise the problem and Jean-Pierre Escalettes asked me to think about it twice, referring to the media outburst that my request will cause."

Domenech has twice been given a vote of confidence by a large majority of 18 and 19 members of the 21-man council on July 13. and October 15.