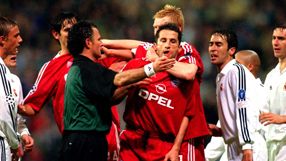 The luck of the draw has ensured a five-year truce between the two swaggering giants, who have been European champions 13 times between them.

But the peace will be shattered when they clash at the Allianz Arena in their Champions League semi-final first leg.

It will their fifth semi-final meeting in Europe's top club competition and offers Real Madrid, well on course to win La Liga, the chance to bring Bayern's season to a miserable conclusion.

The Bavarians have already seen their Bundesliga title challenge fizzle out and are now playing to keep alive their dream of playing the Champions League final in their own stadium.

There is an endless list of ingredients to spice up an encounter whose history of violence, slanging matches and red cards would not be out of place in South America.

Bayern coach Jupp Heynckes and forward Arjen Robben both have scores to settle, having left the Bernabeu through the back door after their spells at Real.

Heynckes was the coach who ended Real's 32-year wait for their sixth European Cup title in 1997/98 yet despite this was removed.

Dutchman Robben was booted out after being told he was not wanted by club president Florentino Perez.

The pre-match comments have been the usual banal fare with players and officials offering respect for the opposition and playing down rivalries.

"There are a lot of elements to take into consideration and the first of those is Bayern's history," said Real director Emilio Butragueno.

"They are a club with great pride and they know this is probably their last chance to end the season on a high, not to mention the fact that the final is at their stadium.

"As professionals and as a team they will want to prove their mettle and they will try their hardest against Real Madrid."

Yet Butragueno is all too aware of the bitterness between the two clubs, having played for Real during the 1980s.

The first meeting between the two sides, in the 1975/76 semi-finals, set the tone.

Real's Roberto Martinez broke his nose in a collision with Bayern goalkeeper Sepp Maier and a fan known as "El Loco del Bernabeu" (The Bernabeu madman) ran onto the pitch and attacked the referee and Bayern striker Gerd Muller.

Bayern went on to the win the competition for the third year in a row.

Their next competitive meeting, another semi-final 11 years later when Bayern again won, brought the infamous incident where Juanito stamped on the back and then the head of Matthaus while a team-mate kicked the German playmaker's thigh.

Even when the matches were supposedly friendly, there was trouble.

In 1981, Bayern's entire team stormed off the pitch during a mat