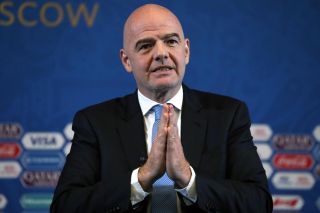 FIFA is set to trial concussion substitutions at this summer’s Olympic Games, but football’s law-makers have been criticised by a brain injury charity for not doing enough to protect players.

A team set up by the game’s law-making body, the International Football Association Board (IFAB), is to draft protocols which will then be opened up for trial in various competitions around the world.

Some members of an expert concussion group which advised the IFAB, including the chief medical officer of world players’ union FIFPRO Dr Vincent Gouttebarge, were in favour of a 10-minute assessment period for players with a suspected concussion and a temporary substitute being introduced during that time.

However, the direction of travel is clearly towards sticking with the current three-minute assessment period but allowing an additional, permanent substitution in the event that a player is concussed, or suspected of being.

“There’s certainly a strong feeling from FIFA that permanent substitutions would be a good thing to trial, but at this point we wouldn’t entirely close anything off,” Patrick Nelson, the chief executive of the Irish Football Association who hosted the IFAB annual general meeting in Belfast, said.

“We have to write the protocols first and then identify competition organisers to take part in some trials going forward.

“FIFA certainly have expressed a strong interest in being one of the early trials.”

FIFA president Gianni Infantino said: “When you look at the one potential trial that we mentioned, an additional substitution for a concussed player, it brings an additional possibility. Because the health of the players is crucial.

“If there is any doubt, we have to keep the player out. We have been criticised, maybe rightly, for being slow, but now we will move, we will try and we’ll see.”

Brain injury charity Headway were quick to criticise the position IFAB had adopted.

Its chief executive Peter McCabe said: “This is yet another example of football failing to act. This latest announcement just doesn’t go far enough to protect players from the dangers of returning to play following a concussion.

“In practical terms nothing will actually change for the injured player because they are still only going to have three minutes to be assessed.

“Three minutes is simply not long enough to give medics a suitable window to diagnose concussion – a position that other sports, such as rugby, have quickly come to realise.”

The offside law could be set for a major change, too, as IFAB tasked its football and technical advisory panels with looking at ways to encourage “the philosophy of attacking football”.

The advent of VAR has removed the old “benefit of the doubt” to attacking players and in a bid to redress that the law will be revisited, with trials of a new approach perhaps taking place as soon as the 2021-22 season.

Infantino says he would like to see “light in between” the attacker and the defender for offside to be called.

“The philosophy of fostering attacking football always has to guide us. We have to be very aware and very wary of tradition,” he said.

“IFAB is very good at that. But it’s true as well that the rule has evolved over time and we feel that now is really the right time to look into that, to see if we can do something positive for attacking football, whether we can look into providing strikers with more goalscoring opportunities. We need to test it.”

There has been a great deal of debate about some of the marginal offside calls in the Premier League this season.

The handball law has also been updated, to differentiate more clearly between the arm and the shoulder.