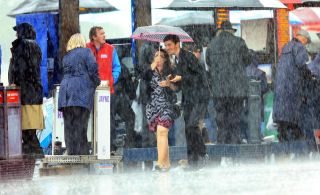 Tranmere’s Sky Bet League One game against Doncaster was the first game to be called off, followed by Bolton’s trip to Lincoln in the same division.

League Two clashes between Forest Green and Crewe, Grimsby and Cheltenham and Macclesfield and Bradford also fell foul of waterlogged pitches while race meetings at Doncaster and Newbury were also victims of the weather.

Clerk of the course at Doncaster Roderick Duncan was due to inspect the course at 7.30am, but following 32 millimetres of rain in the last 24 hours, that check was brought forward and the meeting was cancelled.

He said: “The forecast has been absolutely correct and they are predicting the rain will continue until 3pm.

“It’s as wet as I’ve known it. It’s very disappointing for all of us at Doncaster.”

Doncaster is part of Arena Racing Company and it reports the possibility of rescheduling the Group One is being discussed.

A statement said: “We are incredibly sorry that the adverse weather that Doncaster has faced throughout yesterday and last night has forced the abandonment of the Vertem Futurity Trophy this afternoon.

“Following this, we will take steps to look at alternative options to run the race within the next week alongside our colleagues at the British Horseracing Authority, the Levy Board, horsemen and the sponsor.

“This work will continue and we will offer further updates at the earliest available opportunity.”

The BHA added: “The BHA has been exploring options for rescheduling key races from today, which we expect to take place within the next seven days.

Our match against Doncaster Rovers has been postponed due a waterlogged pitch.#TRFC#SWA— Tranmere Rovers FC (@TranmereRovers) October 26, 2019

“We are working with everyone involved to ensure the best outcome for the sport and will provide more updates as soon as we are able.”

Group Three action was also due to be staged at Newbury, but that meeting has also been cancelled.