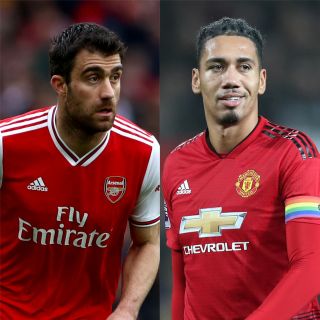 Sokratis Papastathopoulos could be swapping the Premier League for Serie A, with Napoli eager to bring in the Arsenal defender, according to the Evening Standard. The signing of the 32-year-old could lead to KalidouKoulibaly leaving the Italian side amid interest from Manchester City.

Sticking with those heading to the continent, and Chris Smalling looks set to join Roma on a permanent basis, writes the Daily Mirror. Smalling, 30, made 30 appearances for I Giallorossi after joining the side on loan from Manchester United last season.

United boss Ole Gunnar Solskjaer is interested in signing BenoitBadiashile from Monaco, writes Metro. The 19-year-old defender broke into the first team of the Ligue 1 outfit in 2018.

HarryWilson will not be allowed to leave Liverpool on loan this season, writes the Liverpool Echo. The move comes despite interest from Newcastle, Leeds and Southampton in bringing in the 23-year-old midfielder.

Chelsea will have to pay north of £30million to sign EdouardMendy from Rennes, writes the Daily Telegraph.

Sergio Reguilon: The Real Madrid full-back has been linked with a move to Manchester United, but Sevilla are hopeful of keeping the 23-year-old on loan for another season, says Marca.

Ivan Perisic: Inter Milan will have to offload the midfielder as they look to bring in Chelsea’s N’Golo Kante, reports Gazzetta dello Sport.

Krzysztof Piatek: The Poland striker could replace Edin Dzeko at Roma, with the Serie A club looking at a move for the 25-year-old who is on the books of Hertha Berlin, according to Gazzetta dello Sport.