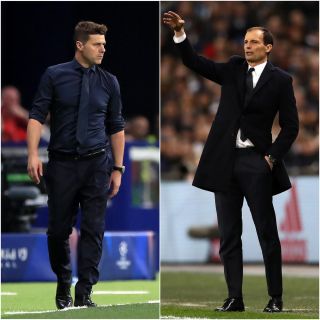 Tottenham manager Mauricio Pochettino is looking to leave the club, but Spurs will not sack him because they would have to pay him £32million, according to the Daily Mail. The paper says that Tottenham players have seen the Argentinian become “noticeably distant” at the club’s training facilities. The report follows Spurs’ 7-2 loss to Bayern Munich in the Champions League.

Former Juventus boss Massimiliano Allegri is reportedly prepared to wait until the end of the season before making his move to the Premier League. The Sun reports the Italian, who won five consecutive Serie A titles with the Italian giants, has been taking English language lessons and could be a candidate for the top job at either Tottenham or Manchester United.

Still at Old Trafford and The Sun also says manager Ole Gunner Solskjaer is targeting fellow Norwegian Martin Odegaard. The 20-year-old winger has turned heads during his loan spell at Real Sociedad from Real Madrid. Odegaard made his debut for his country’s senior squad at 15, and his current form has Madrid boss Zinedine Zidane thinking about bringing him back to the Bernabeu. Solskjaer, however, will reportedly have plenty of competition for the gifted young player’s services, Manchester City, Liverpool and Arsenal also said to be interested.

Erling Braut Haaland is another Norwegian being targeted by United, according to the Daily Mirror, and he made his mark at Anfield by scoring in Red Bull Salzburg’s 4-3 win over Liverpool. Haaland is the son of Alf-Inge, who represented Manchester City, Leeds and Nottingham Forest, and apparently consistently reminds his son that he scored at Anfield during his 10-year career in England.

Former Chelsea boss Maurizio Sarri is keen to link up again with N’Golo Kante at Juventus, according to the Daily Mail. The France midfielder played under the Italian during his solitary season in charge at Stamford Bridge and now Sarri is said to be keen to bring him to Turin. Juventus reportedly believe a fee of around £70million will be enough to get their man.

Benoit Badiashile: The 18-year-old has caught the eye of Chelsea, who want to sign the Monaco centre-back, according to Le 10 Sport.

Blaise Matuidi: Juventus want to extend the contract of the 32-year-old, Calciomercato says.