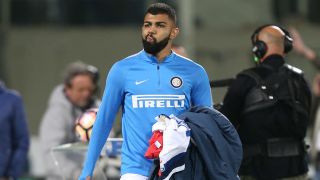 Gabriel Barbosa could return to Brazil in January as he looks to get his career back on track, according to representative Cesar Boaventura.

The striker moved to Benfica on loan in August after failing to settle at Inter following a reported €29.5million move from Santos a year earlier.

However, the 21-year-old's time in Portugal has been met with little more success, with the Brazil international managing just 13 minutes of league football in 2017-18.

"Not due to the quality of the player, but because of the choices of the coach.

"Whether he comes back to Brazil or stays in Europe, I'm sure he will play.

"He has to play where he thinks it best. Gabriel is a great professional, a fantastic person, he never gives up and he will be successful wherever he goes."