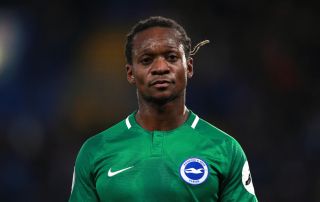 Brighton defender Gaetan Bong has agreed a one-year contract extension to keep him with the Premier League strugglers until June 2020.

Cameroon international Bong has made 22 top-flight appearances for Chris Hughton’s side this season, contributing to four clean sheets.

The left-back, 31, has represented Albion 95 times in all competitions since joining from Wigan in July 2015.

“Gaetan has been part of the squad for the majority of my time here, and he’s proven to be an important player for us in both the Championship and Premier League,” manager Hughton told the club website.

“He gives everything on the field and sets a great example. His professionalism in training every day is commendable, and he thoroughly deserves his new deal.”

Relegation-threatened Albion, who travel to Arsenal on Sunday, are four points above 18th-placed Cardiff with two Premier League fixtures remaining.