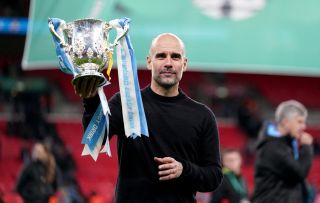 Manager Pep Guardiola has urged Manchester City to move on quickly from another Carabao Cup triumph.

City claimed a third successive trophy after goals from Sergio Aguero and Rodri beat Aston Villa 2-1 at Wembley on Sunday.

Mwbana Samatta pulled a goal back for Villa, who put in a gutsy display just six weeks after City thumped them 6-1 in the Premier League.

The reigning Premier League champions are 22 points behind Liverpool and face Real Madrid in the Champions League last 16 later this month, leading 2-1 from the first leg, with Guardiola keen to focus on the immediate future.

“Everyone knows we have the responsibility to fight and try to win titles and games,” he said.

“There is no time to rest or celebrate. But I think when we remember what he have done, it is because these players have something special.”

Under Guardiola, City have now won eight of the last 11 competitions they have competed in, including two Community Shields.

He added: “Except the Champions League, that’s incredible. It would be so difficult to do it again, not just for ourselves but the opponents.

“That means the consistency. I think the most remarkable thing that, for the Premier League, we have a team that is incredible.

“Many champions the year after have dropped, finished in fifth, sixth, seventh position. But still we are there in second, seven points clear of third.”

Villa came close to taking the game to extra time when Claudio Bravo tipped Bjorn Engels’ header onto the post.

They also slipped into the relegation zone after their drop rivals picked up crucial wins over the weekend.

Boss Dean Smith is hopeful their performance at Wembley can provide a survival springboard.

“You can’t hide away that we’re in the bottom three now. If we play like we did today, then we’ll get out of the relegation zone,” he said.

“The performance level today is the standard that we have to be.

“We were written off after last week (2-0 loss) at Southampton. We expected a reaction today and we got that. We were taking on one of the best teams in the world.

“We came here to win a trophy and we haven’t managed to do that. Our concentration now goes onto the Premier League.”