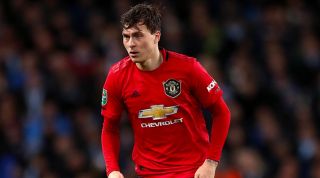 United have the joint-third best defensive record overall in the Premier League, having conceded 29 goals so far in 2019/20.

Maguire has played every minute of every top-flight game this term, with Victor Lindelof his usual partner at centre-back.

And Maguire, who was named United's new club captain last month, says he enjoys playing alongside the Sweden international.

“We’ve had a good season up to now together. When you form partnerships, it takes time. I’m learning his game and he’s learning mine and I think we’re getting better.

“We’re keeping a lot more clean sheets than we were at the start of season and we’ve never really been a team which has conceded a lot of chances.

"We’ve been poor from set-plays with our defending and we’ve had a couple of great goals scored against us from outside the box, but we haven’t really been having games where David [de Gea] has had to make five or six saves, apart from maybe the Carabao Cup second leg against [Manchester] City, when David was brilliant.

“It’s a partnership that’s building and I think we’ll get better and better, and start keeping more clean sheets like we have been doing recently.”

Lindelof also praised his defensive colleague and believes the pair will continue to improve.

"We want to win more games and I think, for every game we play together, we become better and better. Hopefully, we can keep improving and help the team get more clean sheets and get more results.”