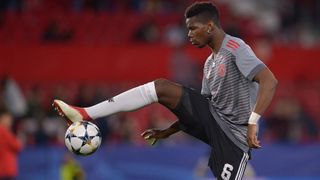 An early injury to Ander Herrera handed Paul Pogba a reprieve after he was dropped for Manchester United's Champions League round of 16 first-leg clash with Sevilla.

Herrera had been struggling in recent weeks with a muscle injury and then appeared to pick up an innocuous-looking foot injury 17 minutes into Wednesday's game at the Ramon Sanchez Pizjuan, allowing Pogba the chance to get involved having previously been left on the bench in something of a shock decision made by Jose Mourinho.

Pogba's form has dipped of late and has reportedly seen his relationship with Mourinho become strained as a result.

The Frenchman missed United's FA Cup win over Huddersfield Town on Saturday due to illness and saw Scott McTominay start ahead of him in Spain, but he has now been given the chance to stake his claim for a place once again.