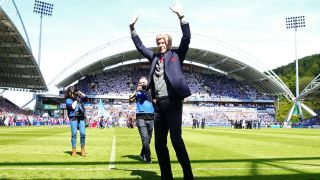 Arsene Wenger's Arsenal reign came to an end in winning fashion on Sunday as his side claimed a 1-0 victory over Huddersfield Town at John Smith's Stadium.

A first-half goal from Pierre-Emerick Aubameyang, his 10th in the Premier League since arriving from Borussia Dortmund, was enough to secure the Gunners' first points away from home in 2018.

It also allowed Wenger to celebrate victory in his 828th and final top-flight match in charge at the 54th different ground he has visited as Gunners boss in the competition.

A guard of honour greeted Wenger as he made his way out onto the pitch and two planes carrying banners wishing him a fond farewell were flown over the ground during the first half.

There was little to shout about on the pitch, with Arsenal secure in sixth place and Huddersfield having guaranteed their survival with their 1-1 draw at Chelsea on Wednesday.

Aubameyang's close-range finish was enough to separate the teams despite some second-half pressure from the hosts, giving Wenger a fitting farewell ahead of a new era in north London after 22 years at the helm.

Steve Mounie brought a good save from David Ospina with an early header in a quiet opening 15 minutes, during which two planes bearing banners paying tribute to Wenger were flown over the stands.

It prompted an exchange of taunts from the two sets of fans, but they were united in their ovation for Wenger in the 22nd minute, with the action on the pitch doing little to inspire the same sort of applause.

That was until Arsenal produced a fitting moment of team magic 38 minutes in. Having won back possession 30 yards from the Huddersfield goal, Henrikh Mkhitaryan combined with Alexandre Lacazette and Aaron Ramsey, whose cross towards the right-hand post was poked in by Aubameyang.

The home side stepped up the pressure in the second half, Ospina doing well to tip a Tom Ince shot around the left-hand post and Rob Holding heading into the side-netting of his own goal.

Lacazette wasted a good chance for a second for Arsenal, chipping the ball straight into Jonas Lossl's hands, and Danny Welbeck was then denied by the Huddersfield keeper when he should really have done better.

Aaron Mooy blasted a half-volley off the crossbar, but Arsenal were able to see out a fond farewell for Wenger, and end a seven-game losing run away from home in the league in the process.