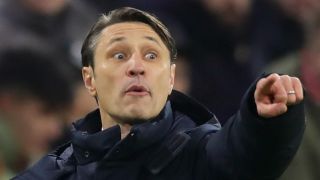 Under-fire Bayern Munich coach Niko Kovac insists the pressure he is experiencing is nothing out of the ordinary because he questions everything he does himself.

Bayern crushed Benfica 5-1 in the Champions League on Tuesday to ease some of the tension, but the fact remains they are enduring a difficult season under Kovac in the Bundesliga.

They relinquished a 3-1 lead over promoted Fortuna Dusseldorf last time out in the league, their third successive Bundesliga outing without a win, leaving them fifth.

Pacesetters Borussia Dortmund are nine points ahead of Bayern – who travel to Werder Bremen on Saturday – but the coach is adamant he is focusing on the club's negative points as much as anyone else.

"I am a person trying to reflect," he told reports at his pre-match news conference. "I question everything I do.

"I'm already thinking about all the things with my coaching team and we analyse everything. For example, the tactical changeover.

Niko Kovac ahead of : "We need to perform on the weekend. Each and every individual must deliver." November 30, 2018

"There are one or two other things [he is focusing on], but I keep that for myself, because I do not want to tell everything."

It has been suggested a lack of motivation is a major contributor to Bayern's malaise, and Kovac accepts that could be an accurate observation.

"In the Bundesliga, Bayern has now become German champions for six consecutive years. To motivate yourself over and over again is certainly not easy, but these are professionals.

"They have already proved that they can do that [motivate themselves]. We have to work on it, we as the coaches, but also every single player, so that we also reach the highest performances at kick-off.

"Of course, at this time [a daytime kick-off] the mood is a bit different than in the evening, but we always have to call for top performances, because we are in three competitions and only in two of them doing well. In the Bundesliga, we are not [doing well].

"To not to lose ground now, I'm not talking about Dortmund but about the other clubs that are ahead of us, we have to perform at the weekend.

"Every single player is demanded of, but we as coaching team, of course, we need the necessary motivation and attitude to be there."