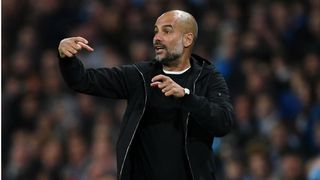 Manchester City manager Pep Guardiola has revealed his desire to enter international management during his career.

The 47-year-old has excelled in club management with Barcelona, Bayern Munich and Manchester City, who he guided to the Premier League title in the 2017-18 season.

While he still sees his immediate future with City, Guardiola concedes that the lure of managing at a World Cup or European Championship might be too great to turn down at some point.

Speaking to HLN, Guardiola said: "I want to be at a World Cup or European Championship once again, yes.

"In the following years, I want to stay where I am. But if someone wants me afterwards, I’m still young."

Guardiola was speaking at the Kevin De Bruyne Cup, an international youth tournament in Belgium supported and named after the Manchester City midfielder.

When asked how to get the best out of Belgian duo De Bruyne and Eden Hazard at the upcoming World Cup in Russia, the Spaniard replied: "It's simple. You just have to put such players on the field and have them play.

"They are intelligent enough to stand on the field without problems. Look, boys like Hazard, [Vincent] Kompany, De Bruyne and [Axel] Witsel are important to their team.

"Now they also have to take a step forward with the Red Devils. They must admit that they can do it."