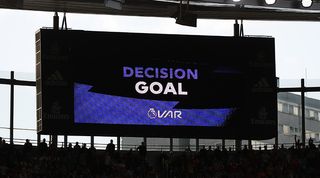 Football's law-makers have called for better education and communication about VAR in order to prevent it being criticised for the “wrong reasons”.

The IFAB meet once a year to discuss potential alterations to the laws of the game, and played a vital role in VAR’s introduction to the Premier League this season.

The new technology has already provoked several controversies in its first month of use, with Aston Villa being the latest victims of its complex protocols. This weekend, Dean Smith’s side saw Henri Lansbury’s equaliser ruled out against Crystal Palace, as Kevin Friend wrongly penalised Jack Grealish for simulation. VAR did not overturn the decision.

Despite these teething problems, IFAB secretary Brud is sure that the decision to implement the review system will be vindicated in the near future.

Speaking to the protipster.com project VAR from Perfect, which tracks the effectiveness of the technology, Brud claimed that any issues would be ironed out by next season.

“If you look at some of the leagues in Europe, you will see that the communication [during the first season of VAR] was not so good, and the success and acceptance was not so good,” he said.

“Second year, the communication was better and we learned from lessons. The acceptance was much higher and people are talking a different way about it.

“In the first year, people are still getting to know it, but by the second year they are almost experts.”

This hopeful projection of VAR’s future is unlikely to quell the criticism it has received from many Premier League fans who bemoan the technology’s effects on the flow of a game. Former referee (and current rent-a-quote) Keith Hackett has described the current situation as “untenable”.

However, without addressing these complaints, Brud went on to advocate for the continued use of VAR, pointing out that the review system is incredibly effective at decreasing the number of errors made by referees.

“The statistics prove that it was the right decision,” he said. “Because in a competition or a full league, if you have 40 clear and obvious mistakes made by referees that are decisive moments, and you can reduce that number by 37 or 38, so out of 40 only two or three remain, then that is a major achievement.”