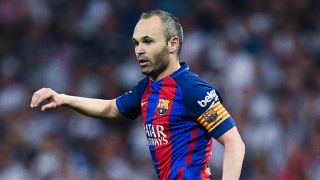 Andres Iniesta graciously offered his congratulations to Real Madrid after Barcelona were dethroned as LaLiga champions on Sunday.

Barca fought back from two goals down to beat Eibar 4-2 in Luis Enrique's final league game at the helm, but Madrid's triumph over Malaga ensured they seized the title.

"Well, we won. We did our homework, but Real Madrid were better than us. Congratulations to them," said Iniesta, who rejected the notion Barca had initially been so wasteful in front of goal because they were distracted by Zinedine Zidane's side having taken an early lead.

He added: "No we didn't miss because of that. We won. All the rest is irrelevant. It's a shame it wasn't enough.

"We knew [the Madrid score] at half-time, but we didn't know apart from that. We did the job, but we couldn't depend just on ourselves, it was out of our hands."

Luis Enrique can still sign off with silverware, as Barca face Alaves in the Copa del Rey final next weekend.

"Everyone is grateful for what Luis Enrique did and now we are going to fight against Alaves next week to finish the year as great as possible," said Iniesta.

Takashi Inui's double had the hosts up against it at Camp Nou, but David Junca's own goal cut the gap and Luis Suarez levelled after Lionel Messi had missed a penalty following Jordi Alba's blatant dive.

Messi atoned by converting another spot-kick and added his 37th LaLiga goal of the season with a fine solo run and finish in stoppage time.