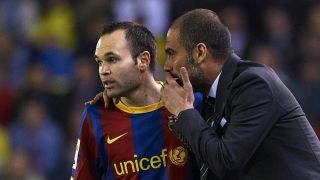 Iniesta, Barca's midfield metronome during Guardiola's trophy-laden reign at Camp Nou between 2008 and 2012, announced on Friday this season will be his last for the club.

The Spain international is yet to confirm his next move, although it is widely expected he will be heading to the Chinese Super League.

And Guardiola, whose Premier League champions travel to West Ham on Sunday, gave short shrift to the idea Iniesta may be reunited with him at the Etihad Stadium.

"There is a lot of fake news about the transfers, so I'm not going to comment about the fake news," Guardiola told reporters.

"Andres had to decide his own future and he has decided to go to China to play there.

"He is going to finish there and after, he has to come back to Barcelona for the next generations, to help us be the club we are.

"He has decided to make the last years of his career in another place for many, many reasons. But if he wanted to compete still at a high level he would have stayed at Barcelona.

"We cannot offer him what he had in Barcelona here. He decided for other reasons, not just football terms."

Reports have also suggested England defender John Stones - who has not featured for City in the Premier League since mid-February - could be on his way out of the club.

But Guardiola again said the media are not correct, hailing Stones despite the 23-year-old being restricted to 14 Premier League starts for the champions this season.

"It's another [piece of] fake news. I am not going to comment on the fake news about the transfers," Guardiola added. "I don’t know how the people believe we are going to sell John Stones. He is a young player, an international English player.

"He is a huge part of the reason why we won the title. The first six months he was amazing, then he went away with the national team twice and was injured.

"After that, Vinny [captain Vincent Kompany] came back at a good level and Nico [Otamendi] was at an amazing level all the season and [club-record signing Aymeric] Laporte, his impact from the beginning was so good.

"All four know they have to compete between them but John is not going to move. I don't know how long I will be here in Manchester but, as long as I'm here, John Stones will be here.

"I am sorry for the guys who announced we want to sell him. I am sorry – they lie."