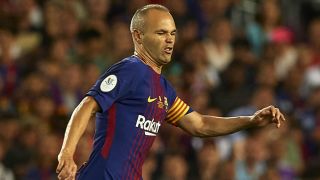 Iniesta sustained a hamstring injury in Barca's 3-0 win over Las Palmas prior to the international break, which ruled him out of Spain's World Cup qualifiers against Albania and Israel.

However, the 33-year-old midfielder – who started just 13 LaLiga matches last season due to fitness concerns – is set to face Atletico in Madrid on Saturday.

Luis Suarez is also in the squad for the showdown at Wanda Metropolitano, despite reports the Uruguay star could have surgery on his knee in November.

There was no room for Arda Turan, who continues to recover injury, while Paco Alcacer and Aleix Vidal also missed out.

Ernesto Valverde's Barca are top of the standings after seven games, five points clear of Sevilla and six ahead of Atletico.