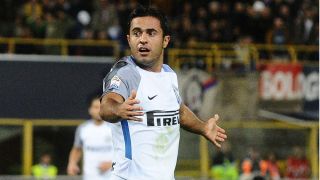 Eder – who replaced the disappointing Joao Mario early in the second half of Tuesday's Serie A clash – won the spot-kick in fortuitous fashion, making the most of a collision with the tumbling Ibrahima Mbaye.

Nevertheless, the penalty was awarded – even after the referee consulted with his video assistant – Icardi stepping up to cancel out Simone Verdi's stunning opener.

And Eder says that Inter, who sit top of Serie A with 13 points from their opening five fixtures, have their eyes on a return to Europe's elite despite a below-par performance at Renato Dall'Ara.

"Our goal is the Champions League and we have to fight at all costs for it," Eder, who added that he has no issue with being utilised from Inter's bench, told Premium Sport.

"We know that we are doing well in all areas as a team, but we know that Bologna are a good team, and they made it difficult for Napoli, even if Napoli managed to win.

"We have to struggle for it. We want to win but it's important not to lose.

"We need to improve, Napoli and Juve have something more, we can only look at ourselves."