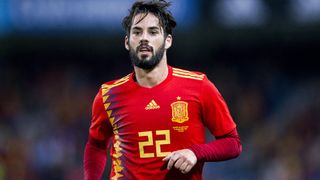 The 25-year-old produced a fine display in a 5-0 friendly win over Costa Rica on Saturday before coming off with an injury in the second half.

Lopetegui was delighted with what he saw from the Madrid star, and believes there is even better to come.

"Isco is a player that is already settled in football's elite," he told a news conference.

"I say he's settled because he's really constant at a maximum level and that's really hard to achieve.

"He made it thanks to his enormous quality but, not only that, also thanks to his great state of mind that made him a great player. That's why he's settled at that level.

"As he said yesterday at the press conference, the best of Isco is yet to come, I have no doubt about it. He has the ambition, the attitude, the quality and the mentality for that."

Isco has already played a starring role for Madrid this season, contributing four goals and three assists in 11 LaLiga games.

While his injury against Costa Rica may worry Madrid coach Zinedine Zidane, Lopetegui played down the severity.

"Isco has a contusion, he already had it after the match against Girona [for Madrid on October 29]," he said.

"It's just a contusion, nothing else. We will evaluate his state [on Sunday] and take a decision about him for the next match, but it's nothing to worry about – just a heavy contusion."

Spain face Russia in a friendly on Tuesday, while Madrid have a derby clash against Atletico four days later.